Home » What is Vibrato?

We have some cool terminology in music. If you’re not well versed you may not know what these words all mean. What is vibrato? Let’s get scientific today and explore a super important term called ‘vibrato’.

Vibrato is basically a slight fluctuation of pitch that occurs when the air speed is fast enough that it oscillates. Whew! There are a lot of big words in there!

Fluctuation is when something doesn’t stay steady. Oscillation describes something that moves back and forth at a consistent speed, kind of like a pendulum.

Music is the most interesting when it changes from what you expect to happen.

There are as many variations of vibrato possible as there are depths and widths of fluctuation possible in one pitch…basically, that’s a lot. In order to make vibrato sound good, it has to oscillate at a depth and speed that matches the note you’re playing. You see, each pitch vibrates at a specific rate per second. For example pretend C in the staff looks like this:

C is already oscillating at a specific rate, so our vibrato has to oscillate at a speed that complements or fits inside the speed of C. A little like this:

High notes above the staff starting at about E need a deeper wider and deeper vibrato to be heard their oscillations. Low notes need quite shallow vibrato and usually on the faster side.

Here are some examples of good and not so good vibrato: 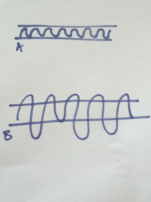 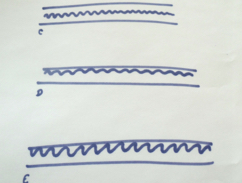 Music is the most interesting when it changes from what you expect to happen. Like when a flat or sharp comes and you have to think about whether or not it fits. It catches your attention. Vibrato is used for the same thing. When you change the speed and the depth of your vibrato, it is like you’ve changed the mood of the note. This catches people’s attention and highlights the character differences in a piece of music. Sometimes it’s good to leave the vibrato out completely, because that catches attention too.

If we don’t use vibrato, music would be pretty bland, kinda like not putting salt on your potatoes.

2 thoughts on “What is Vibrato?”