The Musician Advantage at Learning Languages

The ease of language learning for musicians in a real thing. I started my children into music at very young ages.  (2-4 yrs old!) I knew many benefits of this type of early education like self-discipline, reading ability, attention span, desire to achieve, etc. What I didn’t foresee is the advantages of musicianship and music study later on in their life. Especially the musician advantage in learning languages!  Our eyes have been opened!

We kept music a very regular thing here in our home during our child-raising years. Every single day began with music. We also ended every day with music. It has paid off big-time not just in a musical sense, but I’d like to let you in on an incredible secret we’ve discovered here: Languages!

My children pick up on languages so so easily. I’ve analyzed this a lot in the recent years and had some lengthy discussions with them about it as well. They are all older now, and are doing amazing things with their language skills.

Not only is it fun for them, but they are also using their quick-language-learning abilities in their vocations and to enhance others’ lives. My oldest son speaks Arabic for his day-job and volunteers at hospitals in the evenings for other African languages like Amharic and Oromo. He blesses lives every day because of these skills. 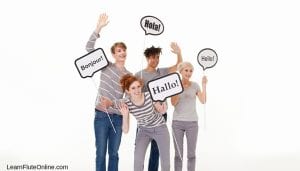 Because of his example, one of my other sons has caught on to these positive language-use skills as well and spends many days translating and volunteering in the school systems for critical languages like Haitian Creole as well as Spanish. All very needed in our predominantly English-speaking communities.

Why do we think that our deep-dive into music as young children is the reason they’ve been able to pick up so many languages throughout their lives (and they are in their 20’s now)? It comes down to one word, I believe: “nuances”

Learning to create tone on an instrument like a flute develops a deep ability to hear different inflections and nuances in sound. These same nuances are the difference between languages. Once a person has trained themselves to listen for the  little details in a tone, they are already being primed for language learning.

Ever have a catchy song stuck in your head? There might be even more science behind it than we think.

Ever have a catchy song stuck in your head? There might be even more science behind it than we think. In fact, the correlation between music and learning a language is one that has been proven strong time and time again. In children, just an hour of music practice per week has been proven to exercise the full benefits of the brain as well as aid in the learning of language and increasing of  I.Q.

Of course children, whose brains have high elasticity, can benefit from any application of the intellectual practice of music. But what about adults?

It is important to think about why language and music go hand-in-hand. When we hear a language, we are able to learn it. This is why children pick up languages so quickly; if a child moves to a different country, chances are that within a few months, he or she will be on their way to being fluent in the new language.

What about when a kid hears a song over and over? They’ll start singing along or singing it to themselves, even before they know what the words mean. Listening to complex sounds in music is similar to language. Music is a language of its own – one that involves the same processing and cognitive abilities to master as any other spoken language.

There have been many studies that have shown that language learning and musical abilities are directly related. 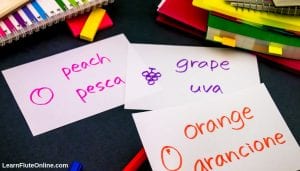 There have been many studies that have shown that language learning and musical abilities are directly related. According to a study in 2010, although representations of music and of language are stored in different parts of the brain, the same “neural” network is used to interpret musical sounds and tiny sounds within our speech.

When it comes to music practice in adulthood, we can see similar trends with ease of music. And it works both ways: some of the best musicians of our generation are also multilingual:

Knowing and learning more than one language is a great benefit for many reasons, but it keeps your brain sharp at any age.

Another reason musicians might have an easier time learning languages is because their ears are so trained to pick up detail and inflection. Musicians are very good at paying attention to details, which is helpful when trying to master a language. When we hear music, we are able to discern its mood.

The same goes for hearing a separate language – Someone who is expressionless might assume that the speaker is being sarcastic or upset, while some words pronounced differently with similar spellings are only picked out through timbre, or the particular sound of the voice.

Just listening to music can help you to learn a language. 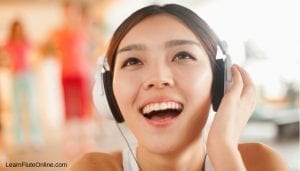 Just listening to music can help you to learn a language. So even if you’re not the one doing the playing, listening to songs with lyrics in other languages helps in the comprehension and retention of a foreign language.

It could even help make you a better independent musician too, if not just whet your appetite for the beauty of international music. There is a definite connection.

So, like my own children who have been able to use music (and especially their flute-studies) to almost accidentally foster a better environment for language learning, you also can open your mind to the possibility of new language.. no matter your age.

2 thoughts on “The Musician Advantage at Learning Languages”